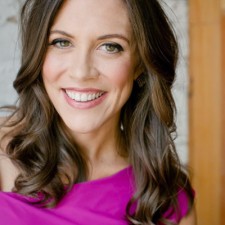 Moments with Marianne with host Marianne Pestana is heard at Dreamvisions 7 Radio Network & WMEX 1510AM Boston. Click below to Listen LIVE every Thursday and Friday at 5am & 5pm EST, and second Sunday at 8pm EST and every third Saturday at 10am & 10pm EST:  http://rdo.to/DREAM7

Don't wait for miracles to happen—make them happen. In Joanna Garzilli's new book, she offers step-by-step tools for activating your genius, cultivating brilliant ideas, and—ultimately—living the life of your dreams.

Tune in on Friday, February 3rd at 5am & 5pm EST & Thursday, February 9th 5am & 5pm EST for How Old Is Your Soul?: The Essential Guide to the Lessons, Gifts and Archetypes of Every Soul Age with Alyssa Malehorn and The Overwhelmed Brain: Personal Growth for Critical Thinkers with Paul Colaianni on Moments with Marianne.

Alyssa Malehorn is a spiritual teacher, soul guide, psychic medium and divine transmitter of healing energies for the ­purpose of illuminating and demystifying the path to enlightenment. She is a catalyst for transformational healing, wisdom, and joy for individuals and groups worldwide. The creator of the life-changing, online Spirit Within: Spiritual Awakening Program, she leads the divinely inspired, best-­selling programs Discover Your Divine Team; Awakening & Ascension; Channeled Light Healing; In The Light, and more.

Best selling author and Personal Empowerment Coach Paul Colaianni is the host of the top-rated personal growth and development podcast called The Overwhelmed Brain. Having gone through a dysfunctional upbringing, many failed relationships, and several life-changing events including a breakdown in the desert a thousand miles from home, Paul started a journey of healing and growth that led him to where he is today: teaching others how to make the right decisions that lead to self-empowerment.

Tune in on Friday, February 10th at 5am & 5pm EST & Thursday, February 16th 5am & 5pm EST as we dive into Learned Behavior and Triggers with
Judy Goodman CPC, CSRC, CRC, author of Journey... The Quest of the Soul, and 365 Ways to Live Generously: Simple Habits for a Life That's Good for You and for Others with Sharon Lipinski on Moments with Marianne.

Bringing a new level of understanding to the challenge that most of us face, Internationally recognized, Judy Goodman, CPC, CSRC, CRC may possibly be one of the most gifted teachers, and motivational speakers today.  Her access to the workings of the physical world and 'the other side' is absolutely amazing.  She works and teaches without the limits usually associated with the most talented.  A 'go-to person' for many people!  Born with a gift of seeing beyond the ordinary view of most people, Judy teaches 'beyond conventional wisdom.'  She may be without peer in her experience of the events and workings of the physical and spiritual realms. This extraordinary combination of gifts is very unique

Sharon Lipinski is the founder of the non-profit Change Gangs: Virtual Giving Circles, which helps people make small donations that make a big impact by pooling their small donations with the donations of other people who care about the same cause. She also maintains the largest repository of information documenting the tools, strategies, and accomplishments of some of America’s eight hundred charitable giving circles.

Join us on Saturday, February 12th at 8pm EST & Saturday, February 18th 10am & 10pm EST as we talk with Emmy nominated PBS Show Host Whitney Reynolds on Using Your Platform to Help Others, The Power of Meaning: Crafting a Life that Matter with The Atlantic writer Emily Esfahani Smith and Fifty Shades of Grey, a Sexy Love Story or a Dangerous Trend for Women with Dr. Susan Edelman, Adjunct Clinical Associate Professor at Stanford University in the Department of Psychiatry and Behavioral Sciences on Moments with Marianne.

Emmy nominated Whitney Reynolds' news background and passion for people have been combined to create a show that is changing the world of talk TV. She produces a program that is dedicated to tough topics, inspiring viewers and provoking positive change. The Whitney Reynolds Show educates, motivates and makes a difference, one topic at a time. What started as an online talk show, The Whitney Reynolds Show gained momentum quickly and moved to NBC within its first year. In 2012 the show made strategic changes, which included a move to PBS Stations in Chicago and The Quad Cities. Whitney contributes on "The Weekly Show" on 103.5 KISSfm/ 95.5 BIG/ 93.9 MyFM with her segment, "Whitney's Women." This segment spotlights female entrepreneurs that give back. In 2016 Whitney was recognized as a Humanitarian Honoree at the FAHF Awards for her work through the show.

Emily Esfahani Smith is the author of "The Power Of Meaning: Crafting a Life That Matters" (Crown). She writes about culture, relationships, and psychology. Her writing has appeared in the Wall Street Journal, New York Times, Time, The Atlantic, and other publications. Emily is also a columnist for The New Criterion, as well as an editor at the Hoover Institution, where she manages the Ben Franklin Circles project, an initiative to build purpose and community throughout the nation. Born in Zurich, Switzerland, Emily grew up in Montreal, Canada. She graduated from Dartmouth College and earned a master of applied positive psychology from the University of Pennsylvania.

Dr. Susan Edelman is an Adjunct Clinical Associate Professor at Stanford University in the Department of Psychiatry and Behavioral Sciences. She is a board-certified psychiatrist in private practice specializing in women’s issues. Dr. Susan is the author of the multi award-winning book, Be Your Own Brand of Sexy: A New Sexual Revolution for Women. Practical and provocative, Dr. Susan delivers talks that challenge and empower, often making you question everything you thought you knew. She shows women and men what stands in the way of getting what they want, and teaches powerful take-away strategies that enable them to achieve powerful shifts and lasting results

Prior to cofounding Eloqui, Deborah Shames was an award-winning director of lm and TV. She founded the only female-owned production company in the San Francisco Bay Area—Focal Point Productions, which she ran for 15 years. On camera, Deborah directed luminaries including Wendie Malick, Rita Moreno, Danny Glover, and Angela Lansbury.  To launch three of her independent films, she formed the video distribution company Deborah Films.  Now, Deborah specializes in coaching CEOs and executives to improve their communication and presentation skills

Tune in on Friday, February 24th at 5am & 5pm EST & Thursday, May 2nd at 5am & 5pm EST for Smart Mom's Guide to Essential Oils with Dr. Mariza Snyder and Chinese Holistic Medicine in Your Daily Life with Steven Cardoza on Moments with Marianne.

Moments with Marianne with host Marianne Pestana is heard at Dreamvisions 7 Radio Network & WMEX 1510AM Boston. Click below to Listen LIVE every Thursday and Friday at 5am & 5pm EST, and second Sunday at 8pm EST and every third Saturday at 10am & 10pm EST:  http://rdo.to/DREAM7

Dr. Mariza Snyder wellness practitioner and public speaker committed to inspiring people to live a healthy and abundant life. She graduated Cum Laude from Life Chiropractic College West. She has a background in biochemistry and certifications in nutrition and aromatherapy. For the past eight years, Dr. Mariza has educated women across the nation with her expertise in holistic medicine and nutrition. She serves as an educator on topics relating to women's health and she's an author of six nutrition books: best-seller The DASH Diet Cookbook, The Low Glycemic Index Slow Cooker, The Antioxidant Counter, Water Infusions, the Matcha Miracle and her latest release, Smart Mom's Guide to Essential Oils.

Steven Cardoza M.Sc., L.Ac. is a nationally certified and licensed Chinese medical physician who has practiced for over eighteen years. He holds a master of science degree in traditional Chinese medicine, is a licensed acupuncturist and herbalist, and is certified in Wu taiji and many styles of qigong.